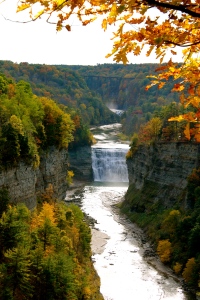 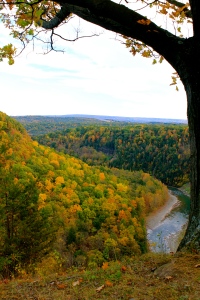 Letchworth State Park is another Upstate New York gem.  Letchworth, known as “The Grand Canyon of the East”, spans from Mt. Morris at its north end and carves it’s way through Western New York into the Souther Tier, almost to the Pennsylvania border.  It is a Glacial Gorge that contains the Genesee River as it travels north to Lake Ontario.  It is amazingly beautiful anytime of year, but it is it’s most spectacular in autumn.  The photographs above were taken in early to mid october of this year. Letchworth is usually at it’s peak foliage in mid to late october, but I did not want to risk it.  Weather here can be fickle and the time the color is at peak may likely also be very wet and cold.  This day was mild and sunny and we couldn’t resist the chance to get down to Letchworth and recreate a family photo we had taken 6 years ago.

The entire park is loaded with gorgeous scenery, but the spot we are enamored with is called “Inspiration Point”.  Once you see it, you are not surprised as to why it was named that.  A breathtaking view of the upper falls greets you as you walk up to the overlook from the parking lot.  6 years ago, when my youngest was just over a year old, we drove down to Letchworth to get a family photo that we used as our Christmas card.  As this fall was approaching, I was walking down my stairs at home and passed the framed photo of my 2 boys from that day.  I was struck by how little they were in the photograph and did some quick math, realizing that it had been six years since we had been to letchworth and taken that photo as well as the one of all 4 of us sitting on the low rock wall at inspiration point with the fall foliage and upper falls as the backdrop.

A week or 2 later, my birthday weekend, we took the opportunity to update it.  The weather was perfect!  We packed a lunch and drove down.  We found the exact spot and took our family shot as well as shots of the boys alone.  We sat on the grass in the clearing behind Inspiration Point and enjoyed our lunch, then I took the shots of the falls you see above.  We got back in the car and drove back towards the park entrance, stopping at the Great Bend Overlook to get some more shots.  As we were getting back in the car to leave, we looked out at the open meadow and there was a crew setting up 2 hot air balloons.  We stayed and watched the process until the balloons took off and disappeared from view.  We had been to Letchworth for dinner at the Glen Iris Inn a couple years ago and saw the same hot air balloons as the travelled down the gorge right over the Upper Falls.  What a sight!

When we got home, I immediately uploaded the images from my camera and went right to editing, but realized that they really didn’t need much, the bright sun and bright colors came out great!  Now we have a beautiful, updated shot for this year’s Christmas card.   If you are in the area and like to take landscape shots, don’t miss Letchworth State Park.

You can find more of my Letchworth images, as well as all my work, at the below websites.